Lutein (/ˈljuːtiɪn, –tiːn/; from Latin luteus meaning “yellow”) is a xanthophyll and one of 600 known naturally occurring carotenoids. Lutein is synthesized only by plants, and like other xanthophylls is found in high quantities in green leafy vegetables such as spinach, kale and yellow carrots. In green plants, xanthophylls act to modulate light energy and serve as non-photochemical quenching agents to deal with triplet chlorophyll (an excited form of chlorophyll), which is overproduced at very high light levels, during photosynthesis. See xanthophyll cycle for this topic.

Animals obtain lutein by ingesting plants. In the human retina, lutein is absorbed from blood specifically into the macula lutea, although its precise role in the body is unknown. Lutein is also found in egg yolks and animal fats.

Lutein is a carotenoid found in numerous organisms ranging from bacteria to algae, yeasts, and plants. The biological importance of this pigment emerged from various studies demonstrating its antioxidant potential, playing a significant role in the prevention of age-related macular degeneration and other diseases such as cancer. Lutein is also essential in the development of infants brain and must be consumed in sufficient amounts to obtain its health benefits. 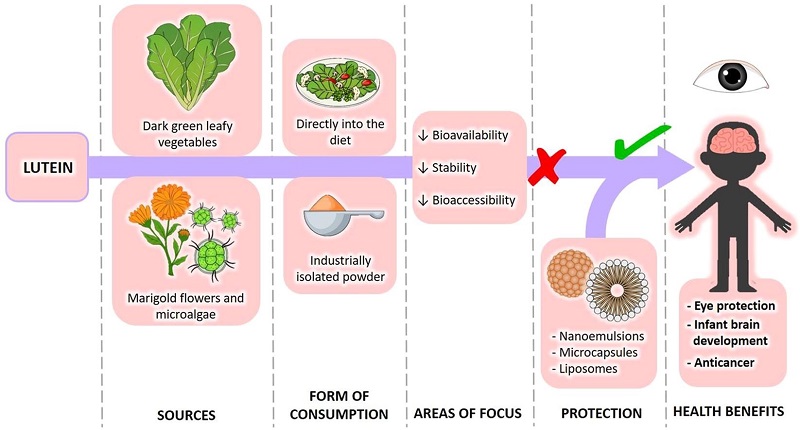 Lutein supplements are typically used in alternative medicine for eye diseases, such as cataracts and macular degeneration. Known to build up in the retina and lens of the eye, lutein is thought to protect the eye from injury induced by free radicals, chemical byproducts shown to damage cells and contribute to the development of certain diseases.