One of the most important macromolecules for cosmetic and pharmacological formulations is hyaluronic acid (H). It is a high-molecular-mass glycosaminoglycan polysaccharide that can be found in different animal tissues such as skin, cartilage, vitreous humor, synovial liquid, bacterial cell capsule, etc. Its rheological and biological features including pseudoplasticity, biocompatibility material, and water holding capacity are especially adequate and essential for multiple types of commercial applications in different fields. Although the production of H has been, during past decades, based on its extraction from bovine vitreous humor, umbilical cord, or rooster comb, microbial H from Streptococcus strains is currently the main alternative. Marine sources of H, such as fish vitreous humor, have also been explored, but lower yields than from the microbial sources were found. Nevertheless, the cost of H production is basically dependent on the price of the commercial culture media. Streptococci are facultative anaerobe bacteria that show fastidious nutrient requirements in relation to the organic nitrogen which cannot be replaced by inorganic nitrogen salts. The formulation of low-cost media is therefore essential for the industrial production of H. In this context, peptones generated from fishing by-products and discards are valuable and effective substrates. In addition, the new policy of zero discards and the exhaustive reduction of marine wastes by the European Union (EU) requires the use of valorizing solutions to solve them. This microbial bioconversion strategy is also framed into the biorefinery concept which is one of the most important pillars to develop in the next decade from the blue biotechnology issue.

In our facility, when microbial fermentation is terminated, the fermentation broth is adjusted to a pH of 4.0~4.5 with trichloroacetic acid and streptococcus bacteria are killed. After removing the bacteria by filtering, ethanol is added to precipitate HA. The dissolved HA is in a 0.1N brine and hexadecylpyridinium chloride (CPC) or hexadecylpyridinium bromide (CPB) is added to form a complex precipitate HA-CPC or HA-CPB. Additional impurities are further removed through a second precipitation. HA is dissociated from HA-CPC or HA-CPB complex in 0.4N brine. Ethanol is added to precipitate HA again. After filtering and drying under vacuum, a purified white solid HA is obtained 4. The yield of HA was about 0.6%~1.0% weight of the fermentation broth. 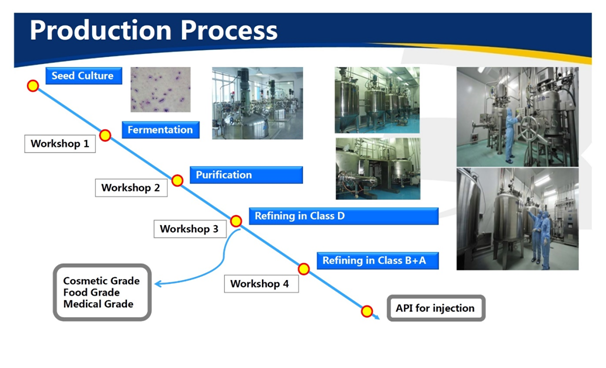